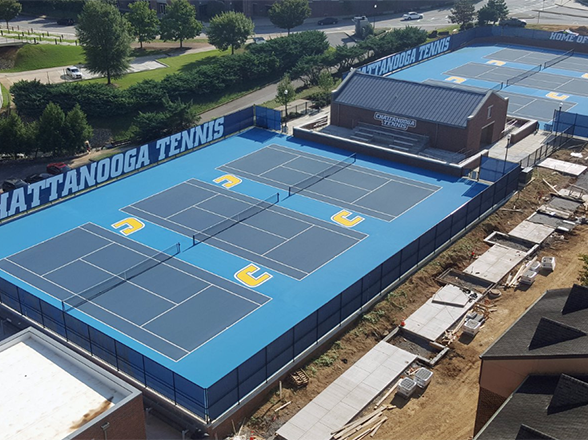 The University of Tennessee at Chattanooga Athletics Department will dedicate its recently opened UTC Tennis Center on Friday, Oct. 5.

“We are very excited for Friday,” stated Camper. “I think it’s a good opportunity for the University to come and celebrate the facility. I think this facility makes the whole University look nice. I think it’s an opportunity to thank Chancellor Angle and Athletic Director Mark Wharton. “It’ll be great to have everybody together, all the alumni and supporters of tennis in general. It’ll be exciting.”

Featuring six courts, coaches offices and locker rooms for both programs, the UTC Tennis Center sits on the site of the original courts in the heart of campus. “Friday is an opportunity to say thank you to everyone and say how much it means to both programs to have a home,” added Merzbacher. “We want to show it off and say thanks to everyone for making this happen.”
Saturday’s Alumni Matches begin at 9:00 a.m. for both the men’s and women’s participants.  “This is the first real event here and to spend it with the alums, it should be that way,” continued Merzbacher. “They’ll have a chance to see the new facility and hang out with the team and realize what a bright future both programs have here.” “I think it’s great when you can have an alumni match,” said Camper. “We’ll have the men and women at the same time, so I think that’ll be nice. “There will be a lot of stories told so I think it’s educational for my players to hear about experiences from former players. It’s a great opportunity for the alumni to come out and see the facility and to see what Chuck and I are trying to do.”
https://gomocs.com/news/2018/10/4/general-mocs-to-dedicate-tennis-facility-friday-alumni-matches-set-for-saturday.aspx
+ Google Calendar+ iCal Export